​During Medici times this room was called The Lounge of the German Guards.  It was a part of the grand duchess's apartment, located in the wing of the palace called the Volteranno Wing "Quartiere Volteranno".

Early in the 19th century, at the direction first of the Bourbons and then the Lorenese, this section of the palace was extensively modified, with new decoration by a group of modern Neoclassical painters.  This room was transformed into an elegant waiting room by the architect Giuseppe Cacialli (1770-1828).
​
The pictorial  decoration was executed between 1817 and 1829 by Pietro Benvenuti (1769-1844), a major figure in Italian Neoclassicism.  In the five large panels and the ten chiaroscuro elements high on the walls, we find the representation of the labors of Hercules, an elegant and refined painting cycle that makes this room one of the more important places in the history of Florentine culture in the 19th century. 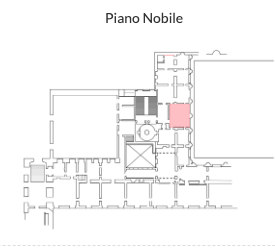